This post is not to explain how to disable or discover issues in Absolute.

In this post, terms "BIOS", "UEFI" and "firmware" all refer to UEFI-based host firmware and are  interchangeable.

You can skip this section.

Last week, I got a Dell laptop with activated Absolute.

Absolute, formally known as Computrace, is popular data and device security software with an interesting persistent technology as explained in Wikipedia.

Absolute's flagship product is the Absolute Platform, formerly known as Data and Device Security (DDS). Absolute relies on patented Persistence technology, which is embedded into the firmware of most computers, tablets, and smartphones at the factory.[25]

I read multiple articles about its internals in the past but did not know much about the modules embedded in the firmware. Out of curiosity, I started to reverse engineer it, then decided to write up the steps I took because I believed this area needed more engineers' scrutiny and tutorials for it.

Getting a BIOS image

There are two easy ways to get a BIOS image to analyze: extracting from an update package or using CHIPSEC.

BIOS images may be extracted from BIOS update packages OEMs publish. For example, any recent Dell's BIOS images can be extracted with a script in found in @platomaniac's BIOSUtilities repo.

As a handy sample, here is the Dell BIOS image we will analyze in this post.

Alternatively, with CHIPSEC, one can dump the BIOS image of the current system with this command after installation if the system is supported.

UEFI modules are normally OS-agnostics. It is, however, not the case for the modules that need to interact with OS environment to establish OS-level persistency, for example. We can find out such peculiar modules by searching OS-specific strings such as "System32" and "NtOpen." Let us do this.

Note that UEFI modules are identified by GUIDs and not human-friendly names. Names may be specified but are optional and unused by the platform software. Take 821ACA26-29EA-4993-839F-597FC021708D as an example, it is unnamed in our image, but in other image, it is named as "efiinstnats". The internet also suggests it may be named as "AbsoluteAbtInstaller".

As the UEFITools shows, UEFI modules are vastly in the PF format and can be analyzed with existing tools.

To reserves engineer 821ACA26-29EA-4993-839F-597FC021708D, on UEFITool, right click the file and extract its body. Then, install Ghidra and the efiSeek plugin as a free option. The other popular option is IDA and efiXplorer, though the free version of IDA is not usable for our scenario. 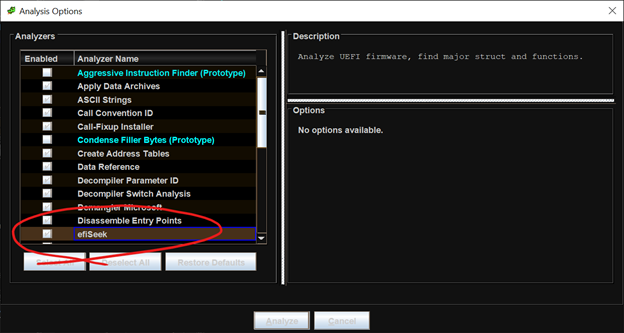 Strings contained in the module is VERY interesting. 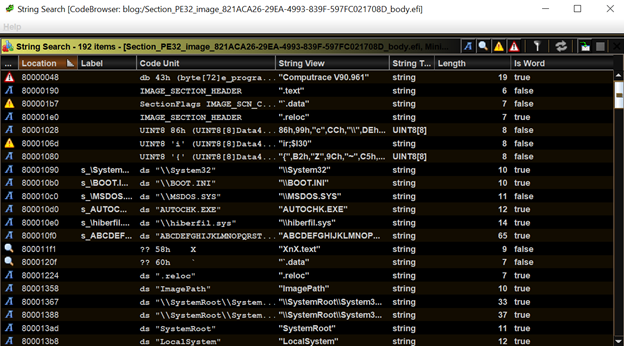 What on earth a UEFI module has to do with SystemRoot. Either way, the string “Computrace” indicates this is Absolute’s component.

By peeking at functions called from the entry point, we can find an interesting function calling InstallAcpiTable(). 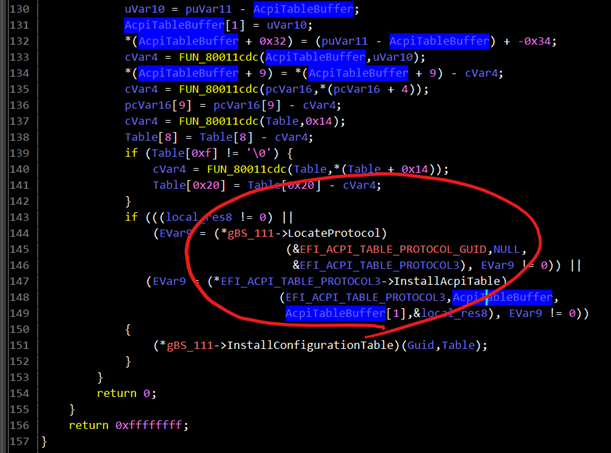 As we can read from the API name it installs… an ACPI table, but what is it? With little bit of clean up, we can find some string literal looking values are assigned to the table variable, in particular, WPBT at the offset 0 looks interesting. 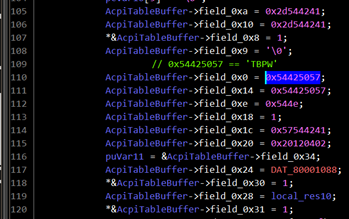 With some google, we can find the Microsoft’s document explaining the table: Windows Platform Binary Table (WPBT) (DOCX)

In short, this type of ACPI table lets a UEFI module instruct Windows’ Session Manager to launch a specified executable on startup. We can see the use of the table in the code. 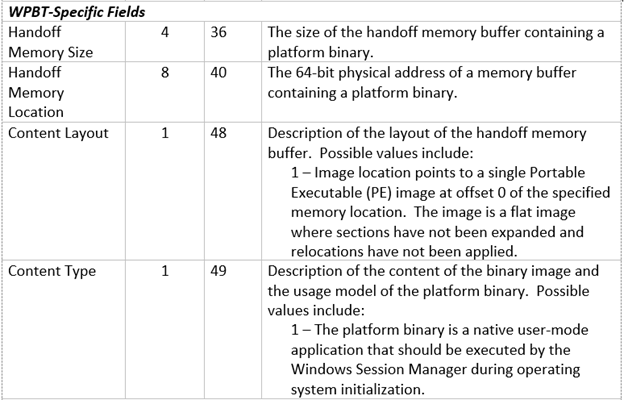 Let us just verify what is being registered. The handoff memory appears to be initialized with the data at 0x80013178, which are coming from 0x80001138 containing the MZ header.

From here, you could investigate smss.exe to see how the program is executed and wpbbin.exe to see the contents of the program. In this post, we are going to further look into BIOS, however.

We have understood how the module installs auto startup mechanism for Windows, but how 821ACA26-29EA-4993-839F-597FC021708D gets executed? The file is an “Application” that is not automatically loaded the platform software.

The short answer: another module starts it.

Finding the parent module requires UEFI specific knowledge that starting an application in the firmware image is done with those steps.

EDK2's UEFI Driver Writer's Guide shows example code that looks about like this:

As show above, the module 8B778A74-C275-49D5-93ED-4D709A129CB1 is found and is a DXE driver, meaning it is executed automatically by the platform software. Note that this module does not have the name in our image but other images had it as AbtDxe and DellAbtDxeBin.

Open the image with Ghidra and search the GUID through memory search. We can find the GUID at 0x800050e0 as shown below.

By cross-referencing 0x800050e0, we can find the function using the GUID and calling StartImage(). 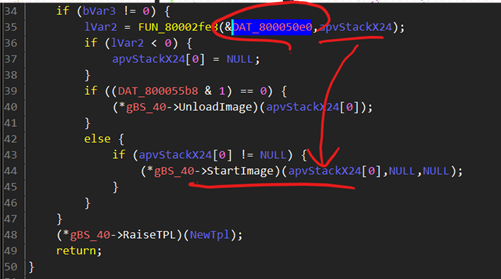 As we inspect the FUN_80002fe8 called above, it becomes obvious that the function calls LoadImage() with the GUID as input, and then, StartImage() is called, which launches the application. 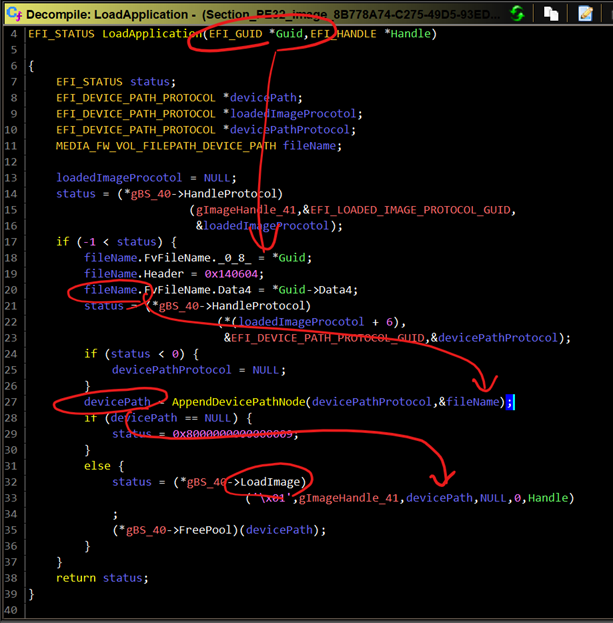 When are those functions called? By cross referencing the function, we can find that the pointer of the function is passed to the CreateEventEx() with EFI_EVENT_READY_TO_BOOT_GUID.

We can make better sense of this with the UEFI specification (PDF). 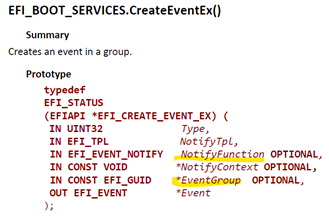 As highlighted, the function is set as a callback for the event that is called right before the OS boot loader starts.

To summarize the flow:

This establishes the mechanism to auto start a Windows application, even if Windows is reinstalled.

An astute reader might notice we have not looked into how the above flow can be activated, or skipped in case Absolute is not enabled by the user. Answering to this question requires further analysis of UEFI variables and additional OEM-specific modules.

On the additional modules, the below snippet indicates that the condition to launch the applications is either: 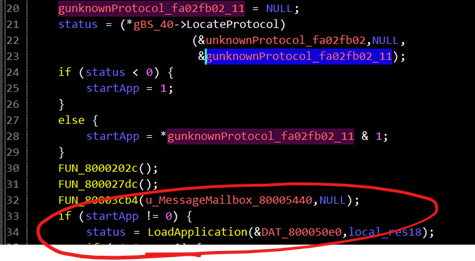 The first case does not appear to happen. The second case depends on whether another module that installed the “unknownProtocol_fa02fb02” protocol sets the bit on their side. Meaning that we would have to reverse engineer the other module to determine the exact condition.

One can find the additional module by searching the protocol GUID on UEFITool again. Those are modules I found on my laptops:

Analysis of the UEFI variable and OEM-specific modules is left as an exercise for readers, as they differ across OEMs.

Through this exercise, we studied:

Hopefully, you found reverse engineering BIOS images was interesting and more approachable than previously you thought.

Posted by Satoshi Tanda at 6:52 AM