Debugging System with DCI and Windbg

This post introduces how one can debug the entire system including system management mode (SMM) code with Windbg and Direct Connect Interface (DCI). As an example use case, we will debug the exploit of the kernel-to-SMM local privilege escalation vulnerability I reported.

For more details about the vulnerability and its implications, please refer to the GitHub repository. This post focuses on DCI and Windbg.

DCI is a stealthy, accessible and very powerful technology for kernel/firmware debugging and reverse engineering, and Intel Debug Extensions for WinDbg lets us use it through Windbg's already-familiar commands and GUI. This can speed up your security research.

What is Direct Connect Interface?

As DCI is implemented by hardware, the debugger using this interface is capable of debugging a greater range of code including the reset vector and one that runs on the system management mode (SMM). This makes DCI an attractive tool for both developing and reverse engineering firmware, for example.

For a more comprehensive overview of the DCI technology, I strongly recommend taking time to watch the video from Intel and reading a document by the Slim Bootloader team:

Does my system support DCI?

DCI is available on Skylake (6th gen) or later and some of Atom and Xeon models. However, older generations support only a connection type called DCI OOB and require an expensive adapter, as shown in the below table.

If your target system is 7th gen or newer, DCI DbC is supported, and all you need to buy is a USB cable without the VBus. Buy ITPDCIAMAM1M or DataPro's one if the target system has the type-A USB port, or ITPDCIAMCM1M for the type-C USB port. I suggest buying both since I had a device that only worked with the type-C port.

If your target system is 6th gen, DbC is not supported, and you need to buy an expensive adapter called CCA (EXIBSSBADAPTOR). It is expensive but allows you to debug code even from the reset vector, which is not supported by DbC.

There is no notable requirement for the host system, and one can use a USB-C-to-A adapter if needed.

The complete list of supported models can be found in the release notes of Intel System Debugger, which we will be looking at shortly.

Is DCI enabled on the target?

If IA32_DEBUG_INTERFACE[0] is set, DCI is enabled. Use a kernel debugger or RWEverything to check this. For obvious reasons, DCI should be disabled by default on systems in the market. If not, report it to the OEM. It is a vulnerability (see CVE-2018-3652).

How can I enable DCI?

There is a couple of ways to do this: changing BIOS settings or patching NVRAM with RU.efi

Very occasionally, BIOS settings offer an option to enable DCI. I have seen a couple of configuration names for this purpose as listed below. Enable them if available.

I had a case where the configuration was available but had no effect on IA32_DEBUG_INTERFACE.

The BIOS settings for DCI is often hidden in the production systems, but one can make the same effect as changing the settings by overwriting NVRAM storing the setting values. This is a bit involved process but explained in multiple articles as listed below. Here are the highlights of the steps.

For completeness, Intel Flash Image Tool (FIT) is another tool that can patch firmware and enable DCI. While I have never tried it yet, I heard recommendations of this tool from multiple sources.

How can I connect the target via DCI?

Select "Get the Full System Studio Package" then download the "Standalone Offline Installer".

Beware of that Intel has transitioned from ISS to a different product set and rebranded System Debugger as Intel System Bring-up Toolkit, which requires NDA to download. The above download link is still alive as of this writing but maybe shutdown in the future.
On installation, make sure to install Intel System Debugger at least. Once you install ISS, here are some pages you can refer to for connecting to the target via ISS:

I recommend a legacy version of it for simplicity. It can be launched with

The installer should have installed the extension that lets you debug the target with Windbg through DCI. To use the extension, the extended debug interface (EXDI) IPC COM server needs to be registered on the host with the following commands:

Then, reboot the host system.

Once the connection is successfully established, type "windbg()" 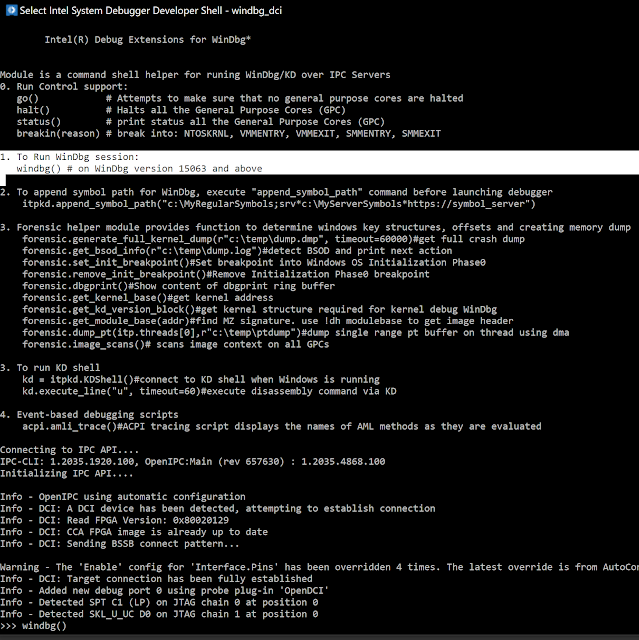 Windbg should start, show disassembly and register values, and accept most of the commands like .reload if successful. 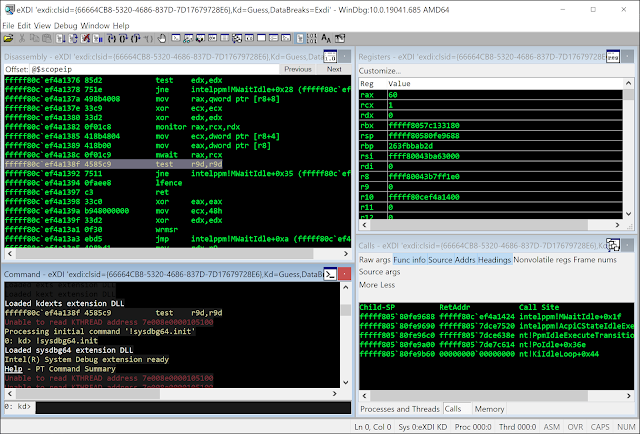 Debugging the Windows kernel via DCI is functional but pointless unless using the kernel debugging is impossible. Instead, let us debug the SMM vulnerability exploit as an example use of the extension.

The SMM vulnerability and exploit

The vulnerability is that SMI 0x40 allows arbitrary SMRAM to be overwritten with 0x07. The exploit uses this primitive to overwrite a function pointer in the global variable referred to as SMST to achieve arbitrary code execution in SMM.

The beautiful thing about SMST is that its address is leaked outside SMRAM by design. Ring0 code can search SMM core private data, which has the distinctive 'smmc' signature, from the UEFI runtime code region, then find the leaked pointer in it.

The exploit takes advantage of this and locates the address of the function pointer in SMRAM without depending on BIOS and system versions. For more details of the vulnerability and exploit, see the GitHub repository.

Debugging SMM and Shellcode with Windbg

When the exploit is executed on a patched system, it debug-prints the range of SMRAM, addresses of SMM core and SMST, but fails to run the shell code.

Let us debug the exploit and simulate successful exploitation with help of Windbg. We will:

First, break into the Windbg and set a breakpoint to one of NT APIs the exploit calls.

On another windbg_dci session, enable the SMM entry break and resume the system. The system will break into the debugger again.

On the Windbg session, confirm that this is SMI 0x40 by checking RIP being 0x8000 and AL being 0x40. Then, dump the contents of SMRAM according to the range debug-printed by the previous run.

Download and run the SMRAM forensic script authored by Dmytro Oleksiuk (aka Cr4sh, @d_olex). This will show the address of the SMI 0x40 handler.

On the Windbg session, confirm the address looks correct. You can also find that the function refers to outside the SMRAM as highlighted in red. Let us run the target until there.

How does the exploit compute this address? Remember that the exploit was able to find the SMM core private data at 0x87f21390. Let us "dt" the address to confirm that the SMM private core data is indeed present in the address, as well as the leaked address of SMST highlighted in yellow.

The exploit adds 0xd0 to the address of SMST since its layout is known. As shown below, the offset 0xd0 is the function pointer SmmLocateProtocol.

So, the SMI 0x40 would have been about to overwrite the contents of the SmmLocateProtorol field.

Since the code we are debugging is no longer vulnerable, let us emulate successful exploitation by changing the RIP to the MOV instruction. After stepping through the instruction, we can confirm the contents of the address highlighted in yellow was changed to 0x07.

After repeating this step 4 times, the address is overwritten to 0x07070707, outside the SMRAM.

Let us run the target one more time to verify successful exploitation. The next SMI is 0xdf, which will call SmmLocateProtocol.

🎉 As expected, the target breaks into the debugger at 0x07070707. Once the shell code is executed, its output stored at 0x0 can be checked.

Hopefully, you find the combination of DCI and Windbg interesting.

Tips for general debugging with DCI

Tips and references for reverse engineering SMM with DCI

Posted by Satoshi Tanda at 5:36 AM No comments: